Characterization of EPDM Rubber by TGA and Hi-Res‘ TGA 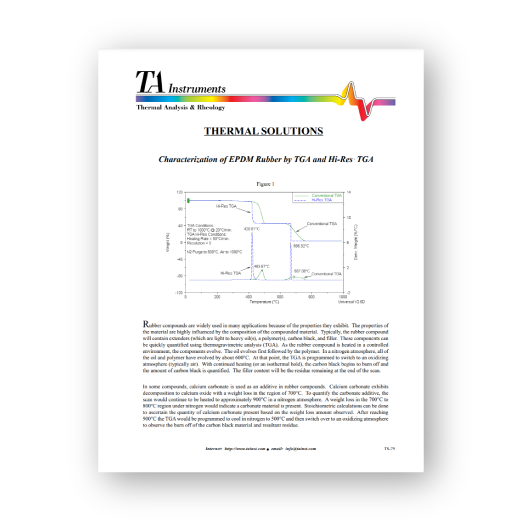 Rubber compounds are widely used in many applications because of the properties they exhibit. The properties of the material are highly influenced by the composition of the compounded material. Typically, the rubber compound
will contain extenders (which are light to heavy oil(s), a polymer(s), carbon black, and filler. These components can be quickly quantified using thermogravimetric analysis (TGA). As the rubber compound is heated in a controlled
environment, the components evolve. The oil evolves first followed by the polymer. In a nitrogen atmosphere, all of the oil and polymer have evolved by about 600°C. At that point, the TGA is programmed to switch to an oxidizing
atmosphere (typically air). With continued heating (or an isothermal hold), the carbon black begins to burn off and the amount of carbon black is quantified. The filler content will be the residue remaining at the end of the scan.