$99 Base price View My Quote Request

Quantitative Nanomechanical AFM images of carbon fibers encapsulated in epoxy: top left shows map of surface height; top right shows the log of the elastic modulus, with brighter areas on the carbon fibers corresponding to greater resilience and elasticity; bottom middle captures the deformation channel of this measurement, which shows the AFM tip compressing the fiber ends on the order of 2 nm.

Topography and Electrostatic Force Microscopy (EFM) scan on titanium carbide alumina surface. Topography image on the left shows the higher TiC grains suspended in the Al2O3 matrix. On the right is an EFM phase image maps the difference in the probe tip’s electrical attraction to the TiC grains vs the alumina.

The Jupiter XR from Oxford Instruments Asylum Research is the first and only large-sample AFM to offer both high-speed imaging and extended range in a single scanner. Jupiter provides complete 200 mm sample access and delivers higher resolution, faster results, a simpler user experience, and the versatility to excel in both academic research and industrial R&D laboratories.

Whether using the Icon scanner with ultra-low noise and high accuracy, or employing the FastScan scanner for high scan rates, the Nano Dimension AFM from Bruker delivers exceptional ease of use and fast, high-resolution imaging and analysis.

Alternative advanced imaging modes allow for visualization and measurement of other material properties, such as: adhesion, modulus, charge distribution, work function, and magnetic domains (among others).

4 Targets for Optimization in a Battery Cell

Laser scanning confocal microscopy (LSCM) is a nondestructive technique which generates 2D and 3D images of a sample... 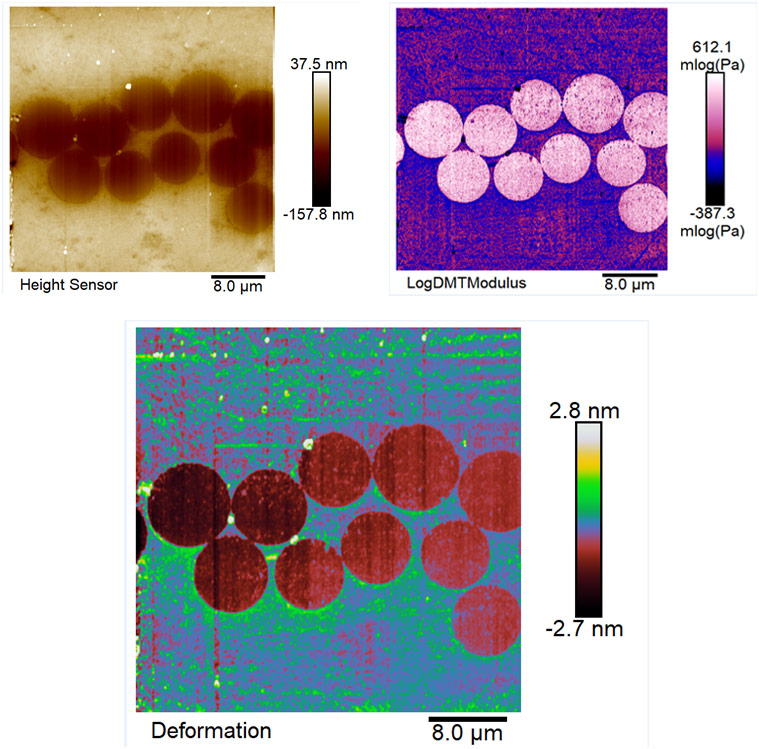 Quantitative Nanomechanical AFM images of carbon fibers encapsulated in epoxy: top left shows map of surface height; top right shows the log of the elastic modulus, with brighter areas on the carbon fibers corresponding to greater resilience and elasticity; bottom middle captures the deformation channel of this measurement, which shows the AFM tip compressing the fiber ends on the order of 2 nm.

Topography and Electrostatic Force Microscopy (EFM) scan on titanium carbide alumina surface. Topography image on the left shows the higher TiC grains suspended in the Al2O3 matrix. On the right is an EFM phase image maps the difference in the probe tip’s electrical attraction to the TiC grains vs the alumina.

Contact mode AFM is the original and most fundamental operating mode of AFM. In these measurements, the probe makes constant contact with the sample surface as it is raster scanned across a target area. The probe consists of an ultra-sharp tip (with approximately an 8 nm radius of curvature) protruding from a cantilever. As the cantilever is scanned, a laser is deflected constantly off its back, producing a positional signal which is measured by a quadrant photodiode detector. The force of contact is dependent upon the deflected signal, and feedback maintains a constant deflection throughout the scan by applying a voltage to a piezo that shifts the probe up and down. The resulting signal is then used to produce a topographic height map of the sample surface.

In tapping mode AFM, the probe tip is driven to oscillation near its mechanical resonance frequency, leading it to make only intermittent contact with the sample. As the probe is raster-scanned across the sample surface, an applied DC voltage maintains constant amplitude in the oscillations. Electrical feedback is monitored to map the topographical height of the sample.

In addition to the raw topography data, phase (the angle between the driving input sine wave and the output response wave of the cantilever) of the probe oscillation is also measured. This data can be related to material properties of the surface and is used to extract certain mechanical properties. Shifts in phase represent power dissipation between the tip and sample, and can indicate whether the tip-sample interaction is attractive (when phase angle is greater than 90 degrees), or repulsive (when phase angle is less than 90 degrees).

Electric Force Microscopy (EFM) requires a specialized probe tip with a thin, electrically conductive coating: this allows the cantilever to respond to long-range electrostatic force gradients. As with tapping mode AFM, the tip is driven to oscillate near its resonance frequency above the sample surface. The strength of the electrostatic forces encountered during the scan cause the resonance frequency of the tip to shift, producing phase changes that are monitored through electrical feedback. These phase changes correspond to the surface potential difference between the tip and sample, with a lower phase change indicating a larger potential difference.

EFM is best performed with dual-pass scans; in the first pass, the instrument detects surface topology and uses this to calibrate a constant height separation from the surface for the second pass scan, thereby isolating the electrostatic force interactions. The two scans can then be correlated to contrast the surface’s structural features and its electrical response properties.

EFM can be distinguished from Kelvin Probe Force Microscopy (KPFM) by that it provides a direct measurement of the electrostatic forces across a sample surface; whereas KPFM requires a compensation technique to quantitatively analyze the localized surface potential.

KPFM is an interleaved tapping mode technique performed in two passes. In the first pass scan, topographical information is collected. The metalized conductive tip then lifts off the surface by 20-50 nm before beginning the second pass scan at a constant height relative to the surface topography. In the second pass, an AC bias applied to the tip induces a capacitive force that causes a mechanical resonance in the cantilever. An additional DC offset bias is applied to match the surface potential, which nulls the oscillation of the cantilever.

In particular, the surface work function – defined as the minimum amount of energy needed to remove an electron from the Fermi energy level to the vacuum level – can be determined by measuring the contact potential difference (CPD) between the tip and sample. The dissimilar metallic / semiconductor composition of the tip and sample materials causes electrons to migrate from the material with a higher work function to that of the lower work function. In solid-state electronic devices, the work function of surfaces can impact critical interfaces between metals and semiconductors, induce local changes in the energy states of electrons, and cause ‘bending’ of the electronic bands. Band-bending in turn can lead to interfacial energy barriers and can influence overall device conductivity and performance.

Magnetic Force Microscopy (MFM) works analogously to Electric Force Microscopy (EFM), but instead of using a charge-coated probe, MFM substitutes a magnetized-coating on the tip. This tip is driven by a piezo to oscillate near its resonance frequency, with a feedback loop that modulates the oscillation amplitude.

MFM is performed in two passes. On the first pass scan, the instrument measures the topography of the surface working in standard tapping mode. Then, with the topography data, the second pass scan is performed with the probe fixed at a constant height above the sample, enabling better isolation of magnetic forces during measurement.

During the second pass scan, the phase of the cantilever is related to the attraction or repulsion by the magnetic force gradient. Repulsive forces shift the resonance curve to a higher frequency with a positive phase shift. Conversely, attractive forces downshift the frequency and decrease the phase shift. By analyzing these shifts, experts can quantify the magnetic force gradient strength, and map the magnetic domains and domain walls with nanometer-scale lateral resolution.

Peak Force Quantitative Nanomechanical Testing (QNM) is based on Peak Force Tapping mode TM in which the tip performs force-deflection measurements 1000 times per second. Unlike in tapping mode, which uses a feedback loop to maintain a constant amplitude, QNM measurements instead controls the point of contact force between the tip and surface.

During tip approach, attractive forces are dominant. Once the tip makes contact, the applied force on the probe increases until it reaches the preset peak. Adhesion can be measured as the tip is withdrawn, by analyzing the minimum force required to reach the pull-off point from the surface. To map adhesion and other nanomechanical properties, the QNM instrument analyzes plots of force versus separation (the ‘indentation depth’ or z-deformation of the piezo modulation). These curves work analogously to load-indentation curves in nanoindentation; however, QNM applies loads in the pico-Newton to micro-Newton range, while nanoindentation operates in the micro-Newton to milli-Newton load range.