$99 Base price View My Quote Request

“These are incredible images. Thanks for the preview.
It is so satisfying to get definitive answers to our questions!”
– Brad Aitchison, Sr. Process Engineer, Redlen Technologies

TEM micrograph capturing the interface between two layers of distinct materials with various crystalline phases. This image was shot at 35kx magnification.

This TEM micrograph shows the same interface as above, captured at 410kx magnification. At this level of magnification, it is possible to see individual columns of atoms in within the crystalline domains of the materials.

In a TEM, a high-energy electron beam is applied to a very-thin sample (a lamella), which is prepared to be electron-transmissive i.e. typically 20 to 50 nm thick.

As the beam passes through the sample, scattering interactions occur between its electrons and the atoms present which alter the transmitted beam intensity. These scattering events can produce several types of contrast in the final image, including: amplitude contrast (arising from atomic number and mass/thickness) phase contrast (from quantum phase shifting due to multiple scattered beams’ interference), diffraction contrast (from crystal structure and orientation), and more.

Different imaging modes on the TEM can target certain types of contrast over others, facilitating specialized analysis of relevant information.

The electron beams transmitted through the sample are focused by the TEM objective lens to form an image below it. This image is then magnified through a final series of electromagnetic optics, and detected by a specialized CCD camera.

4 Targets for Optimization in a Battery Cell

FIB-SEM systems are used to produce 2D and 3D images of surface topography, and are able to resolve...

STEM is a hybrid electron microscopy technique used for imaging and morphological characterization with atomic-scale resolution. In Covalent's...

Scanning Acoustic Microscopy (SAM) is a non-destructive and non-invasive imaging technique which uses ultrasound signals to visualize the... 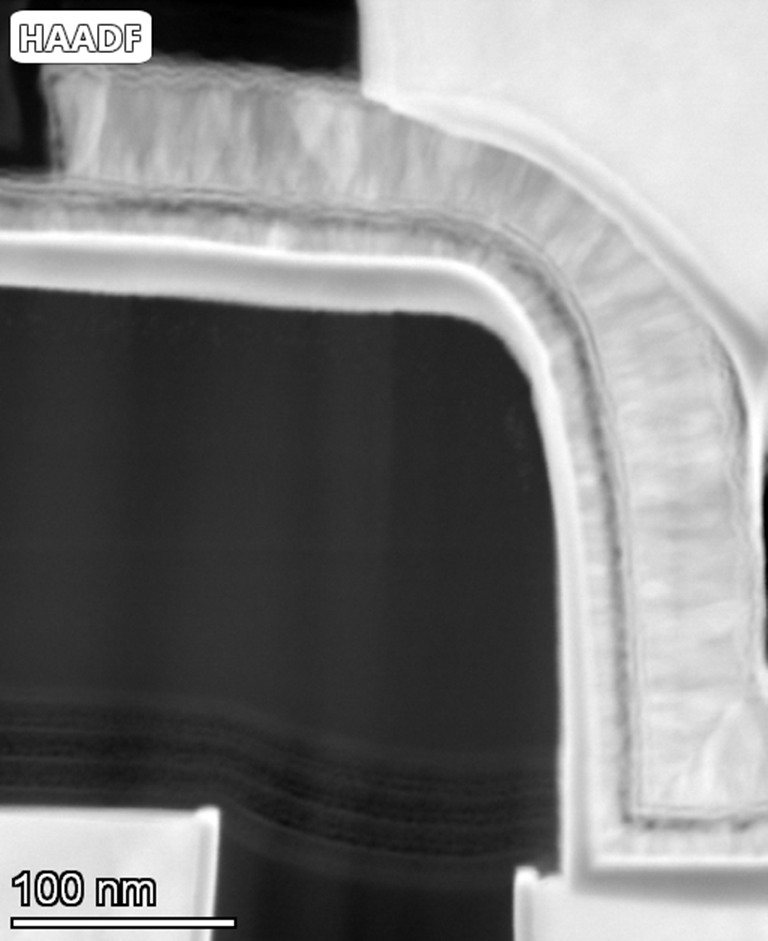 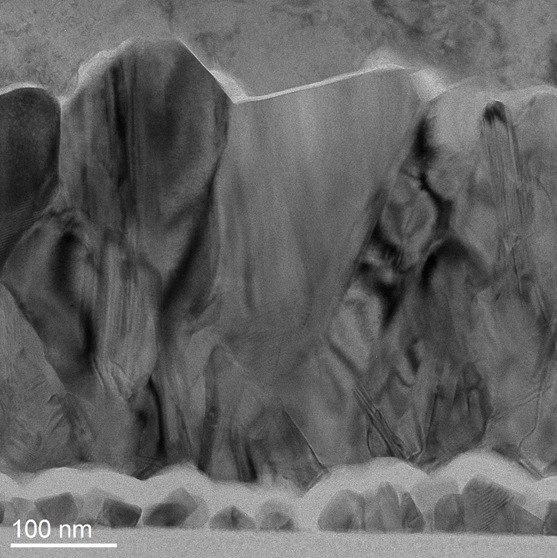 TEM micrograph capturing the interface between two layers of distinct materials with various crystalline phases. This image was shot at 35kx magnification. 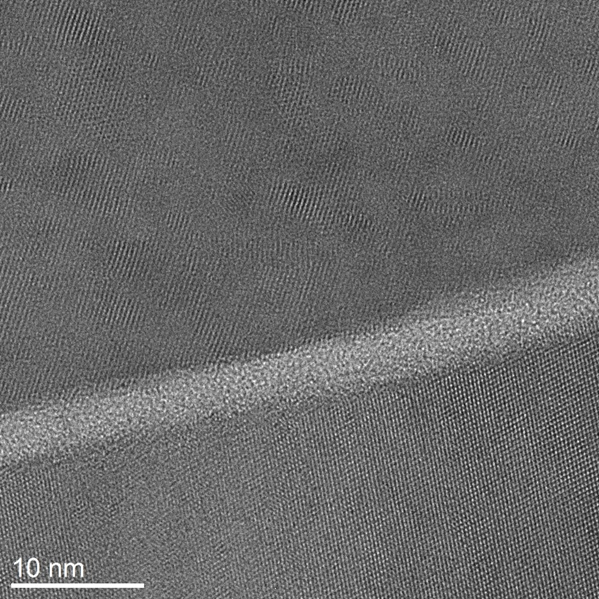 This TEM micrograph shows the same interface as above, captured at 410kx magnification. At this level of magnification, it is possible to see individual columns of atoms in within the crystalline domains of the materials.

In transmission electron microscopy (TEM), a beam of accelerated electrons is transmitted through a selected region of an electron-transparent sample. By using Diffraction mode, the high-energy electrons in the beam are treated as waves, with wavelengths on the order of 1 / 1000th of a nanometer. At this scale, atoms in the solid sample act as a diffraction grating, scattering the beam electrons at angles corresponding to the crystalline structure of the illuminated region of the sample. The interactions of the electrons (as waves) in the transmitted beam create an electron diffraction pattern, which can be used to measure lattice parameters, identify crystalline phase, and even interpolate the crystal structure and orientation of the target area of the sample.

Selected Area Electron Diffraction (SAED) collects the electrons scattered from a specific region, targeted with nanoscale precision using a specialized aperture inserted in the electron beam’s path before it reaches the sample. This gives SAED a spatial resolution up to several hundred times greater than X-ray diffraction techniques.

How TEM Tomography (Single or Dual Axis) Works
How S/TEM: Set of 4 Images (Up to 2 STEM) Works
How STEM Works

Like SEM systems, STEM instruments use a narrow, focused electron beam spot to probe the sample, scanning it in a raster pattern over an analytical area of interest. The output image is produced by detecting the scattered signal intensity at each pixel as the beam scans.

In a STEM – as in a TEM – the detector is mounted underneath the sample and picks up electrons which are transmitted through it. As such, STEM can only be used when the sample is sufficiently thin to be electron-transmissive.

When electrons in the beam excite core electrons in the sample atoms, the subsequent relaxation of the core electrons produces characteristic x-ray emissions. These x-ray photons are then collected and analyzed according to their energies, producing an EDS spectrum. The energies of peaks in the spectrum correspond to the elements present in the scanned area of the sample, and the count of each kind of X-rays is proportional to the concentration of the corresponding element. Because a complete spectrum is collected at every pixel analyzed in the STEM image, elemental composition can both be quantified and mapped across the scanned region in the sample.

Quad-EDS detectors on Covalent’s Talos S/TEM system have a large solid angle and a symmetric orientation to collect the X-ray signal free from sample shadowing. This provides accurate quantification of elemental composition for all elements from Carbon to Uranium.

Electron Energy Loss Spectroscopy (EELS) is a technique performed with Scanning Transmission Electron Microscopes (STEM). The STEM technique uses a focused electron beam which is raster scanned over an electron-transparent sample. As the beam transmits through the sample, electrons will interact with and scatter from the sample atom: either passing without energy disturbance (elastic scattering) or losing energy through interactions with electrons bound to the sample atoms.

When an electron in the beam interacts with a core electron in a sample atom, it can transfer enough energy to induce excitation, resulting in a characteristic drop in the probe electron’s kinetic energy. The energy loss can be measured by an electron spectrometer and mapped to the specific element and energy level of the sample electron. EELS spectra contain features called Core Loss Edges that indicate the elements present in the scanned area of the sample, as well as their concentrations (in Atomic %). Beyond composition analysis, the chemical state and bonding of atoms in the material can be determined by analyzing the energy loss near edge structure (ELNES).